For almost ninety years, Consorzio has been a witness and protagonist of the technical, economic and human path of the winemaking reality of the Langhe.

Already at the beginning of the last century the winemakers of Barolo and Barbaresco felt the need to come together to protect their productions: in 1908 they asked for the creation of a “certificate of origin” issued by an association operating under the control of provincial administration and the Piedmontese wine union. Only in 1924, however, the Italian Parliament promulgated the law on typical wines and established that their characteristics had to be constant and defined by the consortium statutes. 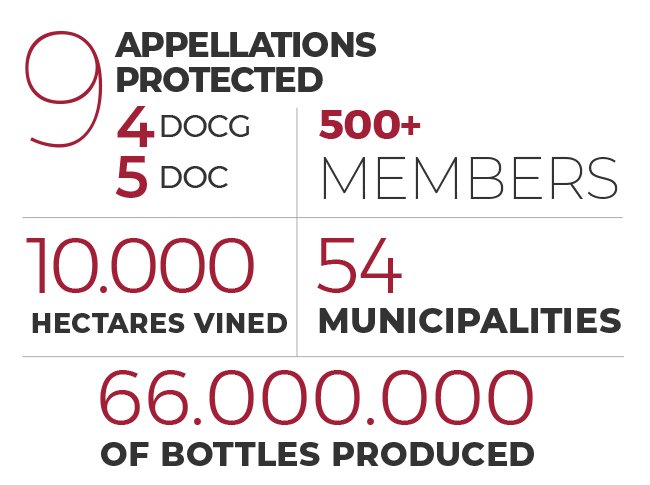 Thus began the preparatory work for the establishment of the Consorzio for the Defense of Typical Wines of Pregio Barolo and Barbaresco, officially founded in 1934 with the task of defining the production context (the area of ​​origin, the grapes and the characteristics of the wine), against fraud, adulteration and unfair competition, to promote knowledge of wines, as well as to defend their name and quality in the most appropriate fora. After the break dictated by the war, the Consorzio was reconstituted in 1947. In 1963, Law 930 was enacted, which sanctioned the birth of the designations of origin and defined the exact role of the Consortia.

The Consorzio of Alba immediately worked for the recognition of the Doc for Barolo and Barbaresco, which took place in 1966, and later for that of the Docg, granted in 1980. In 1984 the Ministry of Agriculture and Forestry officially entrusted the Consortium with the task supervision of the production of the two excellent reds.

In 1994, following the enactment of the new law on the denominations of origin of wines, the n. all denominations produced exclusively in the Langhe and Roero. Today, therefore, the entity is configured as a consortium of the territory and not just of denomination.

Today the Consorzio protects the collective marks of the Denominations, carries out market surveillance, manages the policy of the Denominations and deals with the Disciplinaries, promotes the knowledge of the Wines and their conscious consumption, enhancing the territories of origin, the millenary history and the ability to interpret the present and the future with the style of each individual company but with respect for traditions. It is the expression of men and women passionately rooted in their lands and dedicated to excellent hillside viticulture.