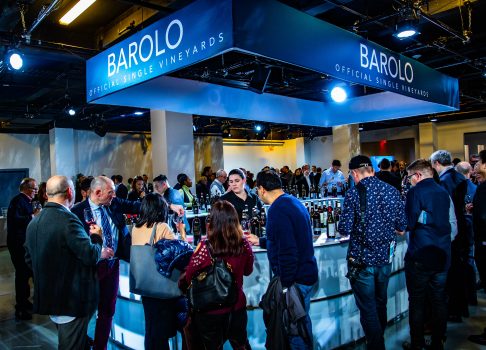 NEW YORK, NY, February 13, 2020 – The Consorzio di Tutela Barolo Barbaresco Alba Langhe e Dogliani, held the first ever Barolo & Barbaresco World Opening in New York City on February 4th and 5th, 2020. A combined effort of over 200 producers pouring their wines for 800+ trade attendees and 500+ consumers secured position of the Barolo & Barbaresco World Opening (BBWO) as the largest Appellation Tasting for Italian wine in the United States. The events concluded with a star-studded gala to celebrate newly released 2016 Barolo and 2017 Barbaresco vintages the cuisine and sounds of Italy.

On February 4th, Barolo and Barbaresco wines were presented to the U.S. market on a scale never seen before from this region at a Grand Tasting for press, trade, and consumers. The tasting event focused on increasing the awareness of the numerous MGA (Menzioni Geografiche Aggiuntive), the term used to indicate single vineyard bottlings, and the unique expression of each growth area in relationship to its specific locality and microclimate. The event featured two sold out educational seminars hosted by the famed Italian Cartographer, Alessandro Masnaghetti, who accentuated topography differences that lead to the subtle nuances of the wine of each MGA. Consorzio di Tutela Barolo Barbaresco Alba Langhe e Dogliani successfully partnered with website wine.com, for the evening portion of the event which was open to the public.

“The event was a tremendous success and a confirmation that the US is – and hopefully will remain – our number one export market.” Stated Consorzio President, Matteo Ascheri.

On February 5th, Masters of Wine, critics, judges, and sommeliers from around the world partook in the World’s Best Palates tasting with the aim to evaluate the overall quality of the 2016 Barolo and 2017 Barbaresco vintages. The sommeliers, came from as far away as Africa, South America, and Asia, to asses and enjoy the new Barolo and Barbaresco vintages. The resulting scores of the tasting were combined with evaluations from the Nebbiolo Prima event in Italy as well as the scientific ratings from the harvest assessment of climate, grape quality and analytical data made by the Regione Piemonte’s Agricultural Department. The overall vintage results were unveiled later that evening during an exclusive Gala Dinner at Eataly Downtown New York, where guests enjoyed exceptional plates crafted by Italy’s most famed chef, Massimo Bottura, and were serenaded by the sounds of the Italian music group Il Volo.

Ascheri continued “Barolo and Barbaresco are extraordinary wines and the 2016 and 2017 vintages are outstanding: we are pleased to have had the honor to present them in New York during the first Barolo & Barbaresco World Opening with a 99.3 and 98.1 score respectively.”

The Barolo and Barbaresco World Opening events were a part of Top Tales, a larger project supported by the European Union aimed at promoting Fontina DOP from Valle d’Aosta, Rice from Baraggia Biellese and Vercellese DOP, as well as the DOCG’s Barolo and Barbaresco. The European communication campaign Top Tales: A piece of Europe on your table, is designed to increase the awareness of the three DOP products in the United States market.