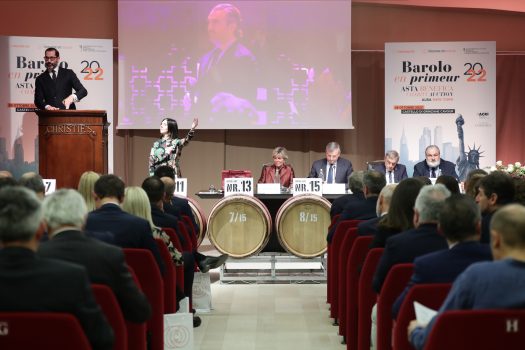 Of the 24 lots in the auction, 4 lots were awarded to participants in live streaming from New York .

On November 13, the last lot will be auctioned at the World White Truffle of Alba Auction, which will surely bring the total to over $ 800,000

The auction raised $769,800 donated by generous philanthropists who attended the event in Piedmont and in  New York City.  These subscribers have been “rewarded” with 14 barriques of Barolo from the 2021 vintage, crafted from the Gustava Vineyard owned by the CRC Foundation and located on the slopes of Grinzane Cavour Castle. 300 bottles of Barolo 2021 will be sourced from each barrique – at the end of the compulsory ageing period  ending in 2025. They will be  marked with a numbered label, created by the international artist Michelangelo Pistoletto.

In addition to that, another 10 subscribers won more  than 1,200 fine bottles of Barolo and Barbaresco – subdivided into 10 lots on the basis of the municipality of production – that 70 producers  donated for the auction with the intent of contributing  to fundraising for the Alba Wine School.