The new released vintages of Barolo (2018) and Barbaresco (2019) fly to California for the second edition of the successful Barolo & Barbaresco World Opening, promoted by the Consorzio di Tutela Barolo Barbaresco Alba Langhe and Dogliani.

On April 28th and 29th, Los Angeles is dyed ruby red for the second edition of the Barolo & Barbaresco World Opening, the largest wine tasting entirely dedicated to the two Piedmontese denominations ever organized in the USA. The 2022 edition will feature the new vintages of Barolo (2018) and Barbaresco (2019) with over 180 wine labels ready to taste for trade and consumers.

“A unique event, able to delight and thrill the American market, which today represents the main export destination for our great wines. A market in which the Consortium and its more than 500 members intend to invest even more in the future” This is the message launched by the president of the Consortium Matteo Ascheri, presenting the second edition of the BBWO.

The two-day BBWO 2022 will begin on Thursday, April 28th with an exclusive preview tasting for the press of the new vintages of Barolo and Barbaresco, 2018 and 2019 respectively, at the InterContinental Hotel.

In the evening, Billy Harris will host an exclusive gala dinner, held in the majestic setting of the iconic Paramount Studios. A unique moment of encounter between Hollywood and Italy, during which four cooks will amaze the guests with authentic food from the Langhe region paired with delicious vintages of Barolo and Barbaresco. The evening will conclude with the announcement of the score of the vintages.

BBWO 2022 continues on Friday, April 29th, when the InterContinental Hotel will welcome journalists, trade, and the public, with over 180 labels to be discovered during walk-around tastings and meetings with producers. There will also be great space for the promotion of MGA (Menzioni Geografiche Aggiuntive) which will be illustrated through two large dedicated geographical banks. An opportunity to discover the thousand facets of the “king and queen” of the Langhe and their indissoluble connection with the terroir of origin. 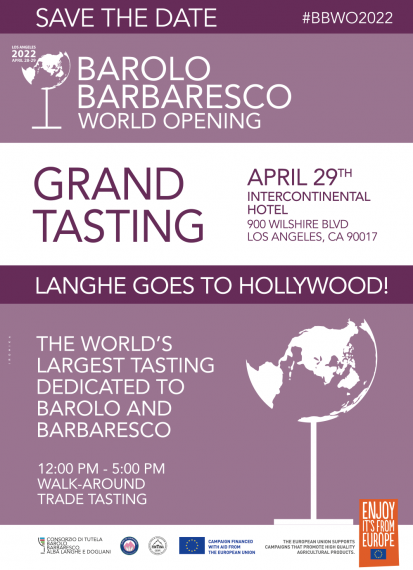 This publication was realized thanks to the contribution of