This is the oldest indigenous red-grape vine of Piedmont and one of the noblest and most prestigious in Italy. Its name derives from ‘nebbia’, the Italian word for mist or fog: some say this is owing to the ‘misty’ look of its grapes, with their velvety covering, and others that it is because the late-ripening grape is often harvested during early autumn fogs.

Nebbiolo has survived intact down through the centuries to the present day. Known also as ‘Queen of red grapes’ it is a finicky vine, requiring elaborate care and attention in order to thrive. It is precisely for this reason that it has known both heydays and moments of utter abandon in the past, although local producers have remained faithful to it through thick and thin, continuing to make the great wines it is capable of producing.

Nebbiolo is a demanding vine, needing exactly the right soil type, a south-facing hillside, pruning and training. A calcareous tufa-based soil is ideal for this vine that buds early – towards the middle of April – and ripens later than most other varieties, around the middle of October. It suffers sudden changes in temperature but oscillations between day and night temperatures are an advantage during the grape ripening phase. For a correct formation of tannins in the grape skins, south or south-west facing hillsides are required, at an altitude of between 200 m and 450 m above sea level and where spring frosts rarely occur.

The Nebbiolo vine produces strong powerful wines, rich in alcohol, that express their characteristics after a period of ageing. From the cultivation of Nebbiolo, Piedmont produces some of its greatest red wines, the pride of the region. 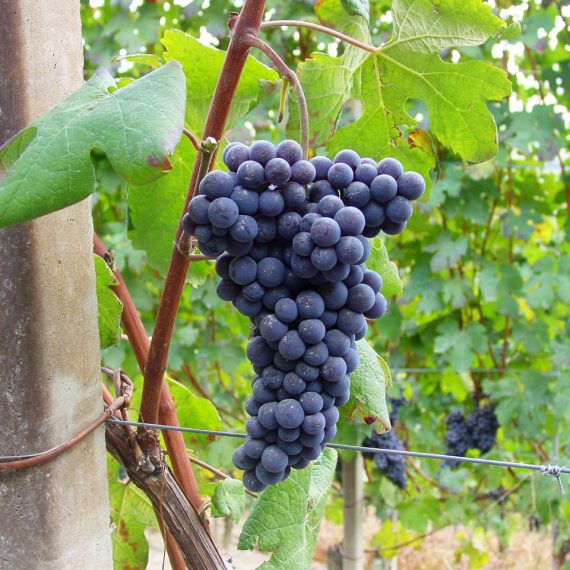