Climate is one of three contributors – along with soil and man’s work – determining the ultimate result we can taste in the glass.

The continental climate we can find in the Langhe region has some distinctive characteristics that make this area unique.

The Apennines protect the hills from currents of air arriving from the sea. Masses of air from the Mediterranean meet those coming down off the Alps and prevent cold currents arriving from the north from hitting the hills. Natural fluctuations in climate are frequent and can be appreciated in the glass: every vintage is different, in fact, producing endless variety in flavours and perfumes.

The various micro-climates created by the hills and valleys of the Langa influenced by the continental climate of the entire area, stimulates particularly fine and aromatic nuances in the wines.

The area of Dogliani is the chillest one – being nearer the Alps – and stands out for its narrow ridges facing the cold Cuneo valley.

The Barolo area has medium temperatures, as it’s protected from the currents but also influenced by the Alps and the warm winds rising from the Tanaro valley. The three ridges of the area create heterogeneous landscapes and therefore micro-climates.

The area around Barbaresco is more uniform, has warmer temperatures and less abundant rainfall. The narrow hills contribute to make the area windier than the previous ones. 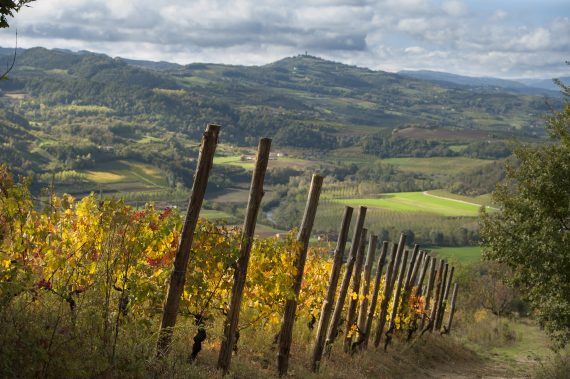 The sedimentary soil of the Langa originates from the Ligurian-Piedmontese Tertiary Basin.

The sediment that can nowadays be found in alternating layers developed on the seabed between 12 and 5 million years ago, during the Miocene.

The geological timescales range from Langhian (15,9-13,8 MA) to Serravallian (13,8-11,6 MA) to Tortonian (11,6-7,2 MA) and finally Messinian (7,2-5,3 MA). Over this time, the sea and the basin conditions changed dramatically and these changes are visible in the rock layers and in the various geological formations found in the Langhe: